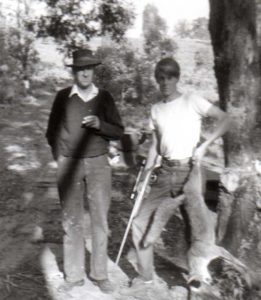 For someone who would go on to write at a later age, the house I grew up in was conspicuous for its lack of books.

Unlike most authors who seem to have been writing since they were able to hold a pen, I was too busy exploring the bush, fishing, hunting and generally doing foolish and dangerous things, to sit down long enough to write anything even if I had caught the bug.

Despite this start, in my turbulent teenage years I discovered poetry, and became fascinated by the way words could work magical transformations in the reader’s mind.

Around this time I also made efforts to understand my place in the universe. I haunted bookstores and local libraries, seeking out those semi-banned books about the occult tucked away on lower shelves in the back racks. Attempting to hide them like that only increased their mystery and appeal. As I have grown older my interest in spirituality and our existence as soul has increased.

A question I have been asked – and it’s a good question – is “if you never considered yourself a natural author, why did you write John Bowman’s Cave?”

I’ve always struggled to come up with a completely satisfactory answer, and the best I can do is relate the story of when I was 17 and saw a movie one night that was narrated by a old man who had lived a harsh and eventful existence, with a fair share of suffering and bad decisions. I related to this man’s story. I was especially struck by his introduction to the movie, which went along the lines of “I have made that many mistakes in my life I consider it my duty to write them down and try to make sense of it all”.

Whether it is possible to take your whole life and put its learnings into a single, comprehensible work is debatable. I can only leave that to my readers to judge. But the venture for me personally was immensely rewarding, and I hope others may gain something to their own advantage or pleasure from reading the book.

I am currently working on a sequel to John Bowman’s Cave, working title ‘The Rory’.